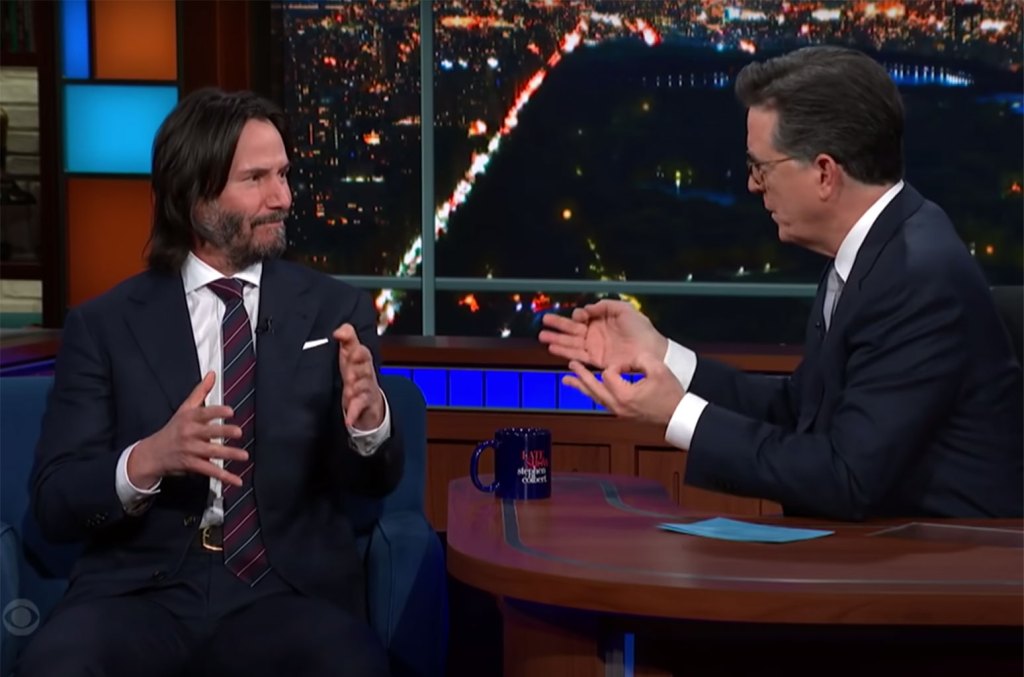 Keanu Reeves has been a movie icon for nearly four decades. But even with Wizard of Whoa! gets star-struck sometimes. On Wednesday night (Jan. 12) The Matrix Resurrections star sat down for The Late Show‘s 15-question “Colbert Questionert,” which, Stephen Colbert noted, was actually inspired by a thoughtful answer the actor gave the host several years ago.

Along the way, Reeves also revealed the time he asked a rock icon to write a note to his friend and picked the dark, goth rock song that he could listen to forever.

Things started off in the most Keanu way possible, with Reeves thinking too hard about the question: “What is the best sandwich?” “The best sandwich you mean, like, for me?” he wondered, before finally landing on the sweet and savory combo of toast with crunchy peanut butter with honey.

Eventually, though, Reeves got to the most important question: has he ever asked for someone’s autograph? The answer was yes, but it was for a friend. Keanu, who spent nearly a decade in the 1990s touring and recording with his on-and-off band Dogstar, said he once asked punk godfather Lou Reed for his John Hancock, noting that the notoriously prickly rocker was totally “cool about it.”

“It was like a little piece of paper and blue ink… yeah it was good,” Reeves said. “It just said, ‘Lou Reed.’” When Colbert noted that it would have been really disappointing if it hadn’t read Lou Reed, Reeves joked that it could have said, “all my best” or “happy holidays.”

He also added that he asked late comedian George Carlin for an auto and that, in similarly terse fashion, the funny man who made a career of dissecting the power of four-letter words wrote simply, “Dear Keanu: F–k you.”

Shaking his head in mock anguish, Reeves didn’t have to think very long about what song he would pick if he could only listen to one for the rest of this life. “I’m going to take Joy Division’s ‘Love Will Tear Us Apart,’” he said of the legendary glum post-punk song released in 1980 just a month after singer Ian Curtis’ suicide.

Along the way, we also learned that the self-described pack rat can’t think of anything he’d throw out, that spiders are his most-feared animal and that he prefers apples over oranges. As for the question that started it all, “What do you think happens when we die?,” last time Reeves said “I know that the ones who love us will miss us.” And he stuck with that answer.

Watch Reeves answer the “Questionert” below.