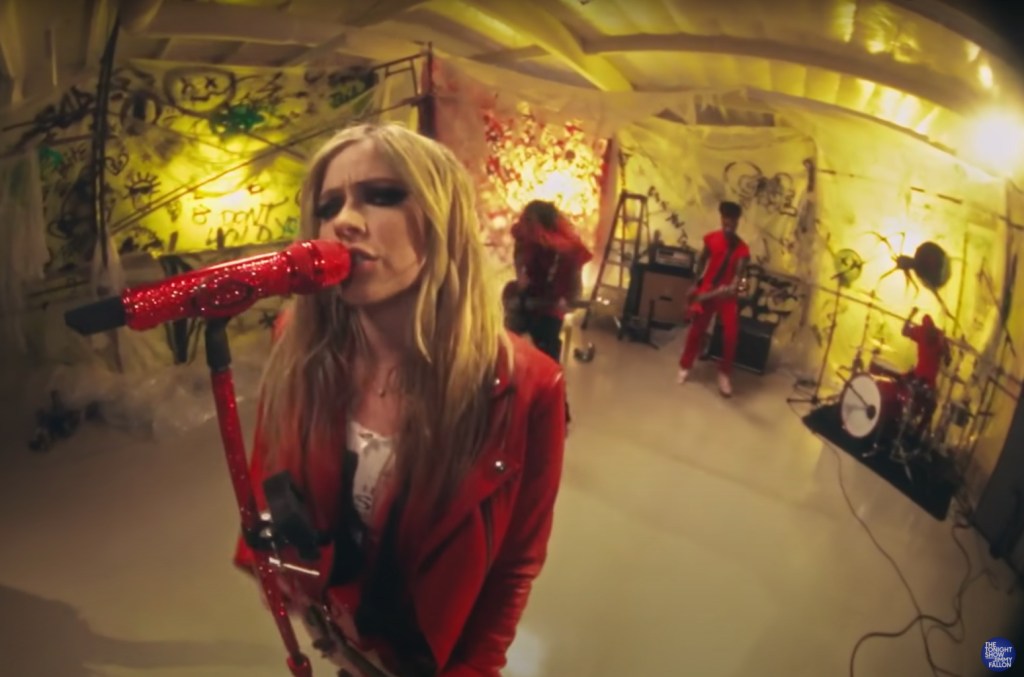 Avril Lavigne is continuing her promo tour for her new single, “Bite Me,” and her most recent stop took her to The Tonight Show Starring Jimmy Fallon on Tuesday night (Nov. 24), where she performed the track alongside Travis Barker, who assisted her on the drums.

The energetic performance featured the singer and her backing band in red and black outfits. Lavigne opted for a red leather jacket and red plaid skirt combo with black boots. The guys behind her kept things simple with plain red tees, which she showed off in a behind-the-scenes pic she posted to her Instagram ahead of the performance. The band started rocking out, with Lavigne belted out the lyrics with her usual sass: “Should’ve held on, should’ve treated me right / I gave you one chance, you don’t get it twice / Hey you, and we’ll be together never, so baby you can bite me,” she concluded.

“Bite Me” is currently gaining traction on the Billboard charts. The song reached the No. 13 spot on the Hot Rock & Alternative Songs and peaked at the No. 5 on the Rock Digital Song Sales, both charts dated Nov. 27.

Lavigne recently spoke about the track and described it as “super sassy and is about someone who wants a second chance but they f—-d up so royally they’re kinda not really worth your time, and they realize after the fact that you had a really good thing going on, and you’re sort of the one that got away,” she said in an interview with Kevan Kenney on Alt 92.3. “It’s a song about self-worth and standing up for yourself and just being like ‘You didn’t treat me right. You didn’t treat me well, and that doesn’t work for me….so baby, you can bite me.’”

Lavigne hasn’t shared any details about her upcoming album publicly, but fans can expect it to be rock n’ roll top to bottom. “The majority of the record is fast, in your face. It’s the most alternative record front to back that I’ve ever made. I just really didn’t want any ballads, I just wanted rock n’ roll and pop-punk,” she added.

Watch Lavigne and Barker perform “Bite Me” below.